(A re-setting of and tribute to The Barmen Declaration of 1934, presented as a reminder to the Churches of the United States on the inauguration day of Donald J. Trump)

Through the vehicle of this blog post – the central leadership of #decolonizeLutheranism has come together to re-affirm their confession of faith and dedication to the one, holy, apostolic church. In fidelity to our dedication to the reform and renewal of the church, we have sought a common message for the need and temptation of the church as a consequence of the run-up to and the result of the recent presidential election in the United States of America.

With gratitude to God we are convinced that we have been given a common word to utter – to express opposition to attempts to establish the unity of the Church catholic by means of false doctrine, by the use of force and insincere practices, the leadership of #decolonizeLutheranism insists that any unity that has ever or will ever exist between the churches in the United States can come only from the Word of God in faith through the Holy Spirit and nothing else – not political power, nor wealth, nor celebrity.

Therefore we call upon all faithful Christians to bring themselves together in prayer and song, and steadfastly to gather around those pastors and teachers and lay leaders and friends and seekers who are loyal to the full and total acceptance of all people into the Church of God, over and above those who would preach otherwise. Or as we read so eloquently in Isaiah 58:6-12…

6 Is not this the fast that I choose:
to loose the bonds of injustice,
to undo the thongs of the yoke,
to let the oppressed go free,
and to break every yoke?
7 Is it not to share your bread with the hungry,
and bring the homeless poor into your house;
when you see the naked, to cover them,
and not to hide yourself from your own kin?
8 Then your light shall break forth like the dawn,
and your healing shall spring up quickly;
your vindicator[a] shall go before you,
the glory of the Lord shall be your rear guard.
9 Then you shall call, and the Lord will answer;
you shall cry for help, and he will say, Here I am.

If you remove the yoke from among you,
the pointing of the finger, the speaking of evil,
10 if you offer your food to the hungry
and satisfy the needs of the afflicted,
then your light shall rise in the darkness
and your gloom be like the noonday.
11 The Lord will guide you continually,
and satisfy your needs in parched places,
and make your bones strong;
and you shall be like a watered garden,
like a spring of water,
whose waters never fail.
12 Your ancient ruins shall be rebuilt;
you shall raise up the foundations of many generations;
you shall be called the repairer of the breach,
the restorer of streets to live in.

The inviolable foundation of the Christian churches in the United States is the Gospel of Jesus Christ as it is attested for us in Holy Scripture and brought to light again in the Confessions of the Reformation and in the power of the lived experiences of all the people of God. The full powers that the Church needs for its mission are hereby determined and limited. All Christians in this country, indeed the whole planet, are bound together by the confession of the one Lord of the one, holy, catholic, and apostolic church. We publicly declare before all of the Christian churches in the United States that the love for the Gospel that all who take the name of Christian claim to possess is now grievously imperiled, and with it, the future role of the Church in the United States.

It is threatened by the teachings and actions of those among the Christian communities who supported the current President-elect of the United States Donald J. Trump – through their vote. their financial contributions, or their voices, as well as through the administrative capacities of their churches, and the grave danger this man and his coming administration present to every marginalized community in our country. This threat consists of the fact that the primary theological basis upon which the churches are united has been continually and systematically thwarted and rendered ineffective by alien principles, on the part of the leaders and spokesmen of the “Christian Right” and those individuals and organizations who have attached themselves to their aims.

When these principles are held to be valid, then, when compared to the teaching of the Gospel in force among all Christians across the world and across time, the church ceases to be the church of all times and all people and becomes evil. As members specifically of the Lutheran communion, but also as partners in the workings of the Holy Spirit in our country among every denomination and confession, we may and must speak with one voice in this matter today. And in view of the theological errors of  Christians, we declare humbly and boldly that they are devastating the church and are also thereby hobbling the mission of the Christian churches in the United States. 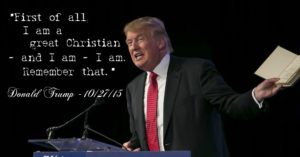 And they do so because their support for Donald Trump and the destructive policies which he and his followers openly advocate, goes against the following truths which we confess, and which they claim to confess:

2. “Christ Jesus, whom God has made our wisdom, our righteousness and sanctification and redemption.” (1 Cor. 1:30.) As Jesus Christ is God’s assurance of the forgiveness of all our sins, so in the same way and with the same seriousness is he also God’s mighty claim upon our whole life. Through him befalls us a joyful deliverance from the godless fetters of this world for a free, grateful service to his creatures. We reject the false doctrine, as though there were areas of our life in which we would not belong to Jesus Christ, but rather that belonged to political leaders, the wealthy, celebrities, or those that have power because of their works — as if justification and sanctification through Christ was not efficacious enough, and that faith in money in power are needed to save us as well. 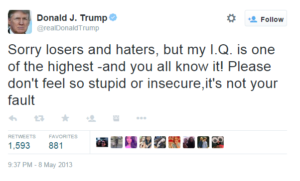 3. “Rather, speaking the truth in love, we are to grow up in every way into him who is the head, into Christ, from whom the whole body [is] joined and knit together.” (Eph. 4:15–16.) The Christian Church is the congregation of the brethren in which Jesus Christ acts presently as the Lord in Word and Sacrament through the Holy Spirit. As the church of pardoned sinners, it must testify in the midst of a sinful world, with its faith as with its obedience, with its message as with its order, that it is solely his property, and that it lives and wants to live solely from his comfort and from his direction in the expectation of his appearance. We reject the false doctrine, the idea that the church can conveniently forget the form of its message and order to its own pleasure or to changes in prevailing ideological and political convictions.

4. “You know that the rulers of the Gentiles lord it over them, and their great men exercise authority over them. It shall not be so among you; but whoever would be great among you must be your servant.” (Matt. 20:25, 26.) The various offices in the church do not establish a dominion of some over the others; on the contrary, they are for the exercise of the ministry entrusted to and enjoined upon the whole congregation. We reject the false doctrine, as though the church, apart from this ministry, could and were permitted to give to itself, or allow to be given to it, special leaders vested with ruling powers of any kind. This power, this authority is given to Christ alone, and cannot be usurped by Christian leaders for the sake of anointing of political candidates, celebrities, or those with power and influence – under any circumstance. 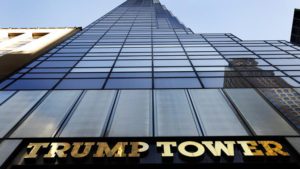 5. “Fear God. Honor the emperor.” (I Peter 2:17.) Scripture tells us that, in the as yet unredeemed world in which the church also exists, the State has by divine appointment the task of providing for justice and peace. [It fulfills this task] by means of the threat and exercise of force, according to the measure of human judgment and human ability. The church acknowledges the benefit of this divine appointment in gratitude and reverence before him. It calls to mind the Kingdom of God, God’s commandment and righteousness, and thereby the responsibility both of those who govern and those who agree to be governed. It trusts and obeys the power of the Word by which God upholds all things. We reject the false doctrine, as though the State, over and beyond its special commission, should and could become the single and totalitarian order of human life, thus fulfilling the church’s vocation as well. We reject the false doctrine, as though the church, over and beyond its special commission, should and could appropriate the characteristics, the tasks, and the dignity of the State, thus itself becoming an organ of the State and a vehicle to further the works of Satan under a patina of ignorance, violence, and ostentatious piety.

6. “Lo, I am with you always, to the close of the age.” (Matt. 28:20.) “The word of God is not fettered.” (II Tim. 2:9.) The church’s commission, upon which its freedom is founded, consists in delivering the message of the free grace of God to all people in Christ’s stead, and therefore in the ministry of his own Word and work through sermon and Sacrament. We reject the false doctrine, as though the church in human arrogance could place the Word and work of the Lord in the service of any arbitrarily chosen desires, purposes, and – be they of the State, of political leaders, celebrities, or those who have money and power.

The central leadership of #decolonizeLutheranism – calling upon all of our friends, kindred, and allies in all churches here in this country and on the entire world –  declares that it sees in the acknowledgment of these truths and in the rejection of the above listed errors. the indispensable theological basis of the true church of the people of God, as passed down through history, through Scripture, and in the hearts and minds of the faithful since the glorious, fiery day of Pentecost almost 2000 years ago. We invite all who are able to accept this declaration to be mindful of these theological principles in their decisions in any and all places where those who call upon the name of Jesus are active in the world.

We entreat all who read this letter to return to the unity of faith, love, and hope – as well as to open places in their churches, homes, and hearts for those who will suffer under the promised xenophobia, transphobia, homophobia, islamophobia, sexism, and racism of the in-coming administration.

And it must be our call, our duty, and our passion to do so.

Signatories (if you wish to add your name, email: decolonizelutheranism@gmail.com):